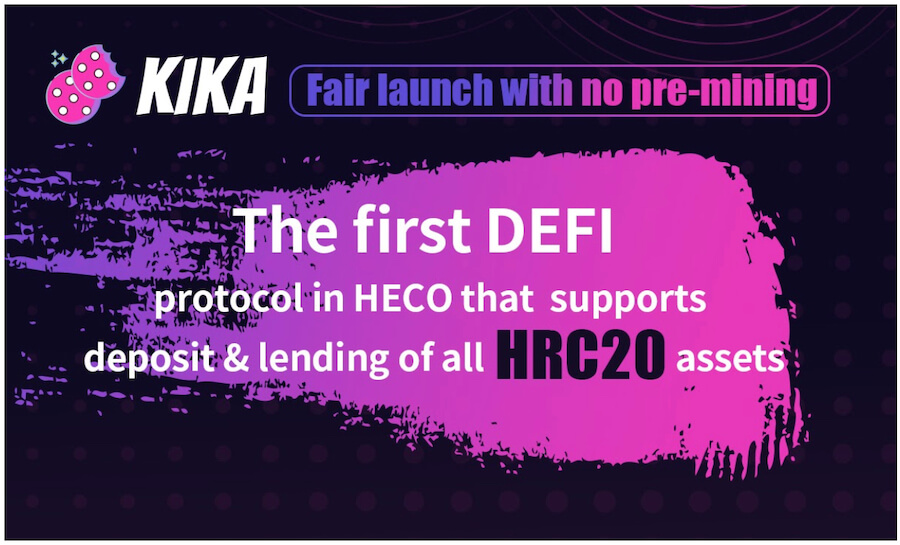 The year 2021 has brought a lot. Crypto prices have skyrocketed, the NFT market exploded, and DeFi continues to blow up, with a year-long almost uninterrupted surge. While DeFi offers a variety of services, such as DEXes, staking, yield farming, and more, lending still seems to be the leading type of DeFi activity in the sector.

However, with the launch of Huobi ECO Chain, a number of new projects with great potential to become new leading DeFi protocols have emerged. One example is Kika— a protocol that supports the launching of lending pools for any HRC-20 token asset.

What do You Need to Know About Kika?

First things first — it should be noted that Kika just launched recently, with some excellent performance, with its TVL exceeding $150 million in only two days. The project is already quite big, and it managed to attract over 20,000 community members even before it saw the launch. In other words, it is safe to say that it is widely adopted, as it supports all kinds of HRC-20 standard token assets.

Naturally, it is fully decentralized, with all rights belonging to the communities that run it. Also. it offers a new type of multi-lending mode, which reduces the risk of system liquidation, which makes it safer and more attractive to investors than many of its peers from other chains.

Distribution itself will take four years to complete, and it will be completed through liquidity mining. As for the remaining 10% (100 million), it will be used as incentive for the development team, as it will support the team’s continuous development and optimization of the protocol.

Functions and Benefits of Kika Token

Of course, we should also talk about the Kika token, which is both — a governance and utility token. That means that its holders will have a say in the way development is heading and will be able to vote on what the project is going to focus on. This will be KIKA’s only use case for the first 29 days of its existence.

However, following that 29th day, liquidity mining will go live, and a certain percentage of KIKA tokens will be required as deposit certificates in order for people to start participating in the mining process.

Lastly, later down the road, a certain hierarchical equity system will be created, where users will be positioned higher or lower depending on how much KIKA they hold.

The launch took place recently, as mentioned, and Kika double currency mining pool launched KIKA-USDT. KIKA APY reward can now go up to 7,000%. So far, there have been several single-currency pools, including HETH, HBTC, USDT, HUSD, MnW, HFIL, HDOGE, WHT, BQB, and DOG. Now, however, a number of additional pools of this kind are coming. According to what is known, the DOGE mine pool has an APY of 6235%.

It is also worth mentioning that the project is growing at an extreme pace, with its TVL exceeding $80 million in 6hours. It is also compatible with 8 major wallets, including Huobi wallet, imtoken, Tkeep, Codebank, Bitkeep, and Tokenpocket. This is not surprising, given the number and quality of advantages that Kika has over its mainstream competitors. For example, it adopts all kinds of HRC20 tokens, it held a fair launch with no pre-mining, it has the ability to go margin short on many different tokens, and more.