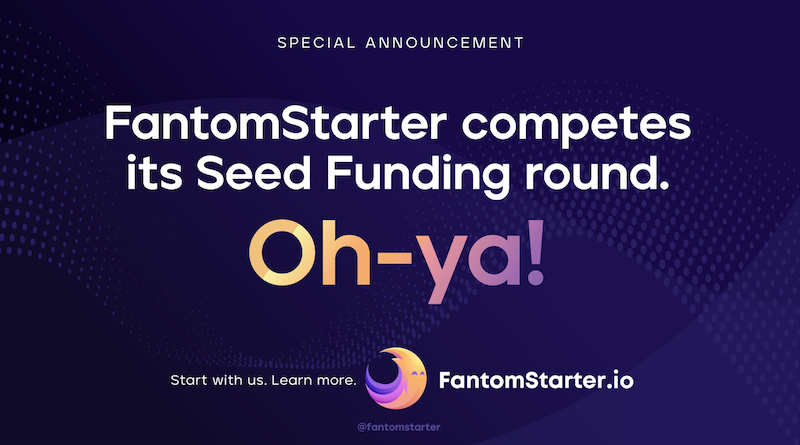 FantomStarter is Set to become the premier launchpad on the Fantom network after the successful completion of seed/private fundraising and the launch of its app on testnet. High demand for FantomStarter’s seed and private rounds indicate this launchpad could send token holders to the moon.

Competition amongst the layer-one blockchain platforms is growing fiercer by the day as the popularity of decentralized finance and non fungible tokens (NFTs) are necessitating the migration away from the high costs of the Ethereum network to more user-friendly protocols like Fantom that offer lower transaction costs and faster processing times.

As the communities for these networks grow, the need for specialized protocols to handle different parts of ecosystem development such as oracle services, decentralized exchanges, and project launchpads opens ample opportunities to get in on the ground floor of the next rising star.

FantomStarter is just one such project in the Fantom ecosystem that has caught the eye of savvy investors and is turning heads in the blockchain community after it successfully completed its seed and private funding rounds and launched the tesnet for its decentralized investment application in the span of less than two weeks.

As the first cross-chain launchpad on the Fantom network, FantomStarter will play a crucial role in introducing new projects to the community and helping them to raise the funds necessary to see their whitepapers come to fruition and build useful tools and applications for the Fantom ecosystem.

The cryptocurrency ecosystem as a whole also stands to benefit from project launches on FantomStarter as the network’s Ethereum Virtual Machine (EVM) compatibility means that projects that utilize the launchpad will be able to migrate cross-chain to any other compatible network such as Binance Smart Chain or Polygon.

After raising a total of $532,000 from its seed and private fundraising rounds which gave the company an overall valuation of $3.6 million, the team at FantomStarter is now preparing for its public launch with the full rollout of its social media channels and ambassador program designed to help meet the global demand for the FantomStarter app.

The main goal of the protocol is to disrupt and democratize the way both blockchain and traditional startups have historically raised funds by enabling retail investors to gain access to the process of a new project launch and receive token allocations that have typically gone to hedge funds and venture capitalists.

Demand for such access was evidenced by the fact that the seed round for FantomStarter was oversubscribed by more than a factor of 50 despite the volatility seen in the cryptocurrency market in recent months and there is no shortage of strategic partnership opportunities for business development that the team has identified for its future expansion.

FantomStarter is now poised to become the hub of development and new project launches on the Fantom blockchain, a protocol that is rapidly becoming one of the top layer-one networks in the cryptocurrency ecosystem thanks to its unique design that enables low-to-no cost transactions and theoretically infinite scalability.

More details can be found at: https://fantomstarter.io