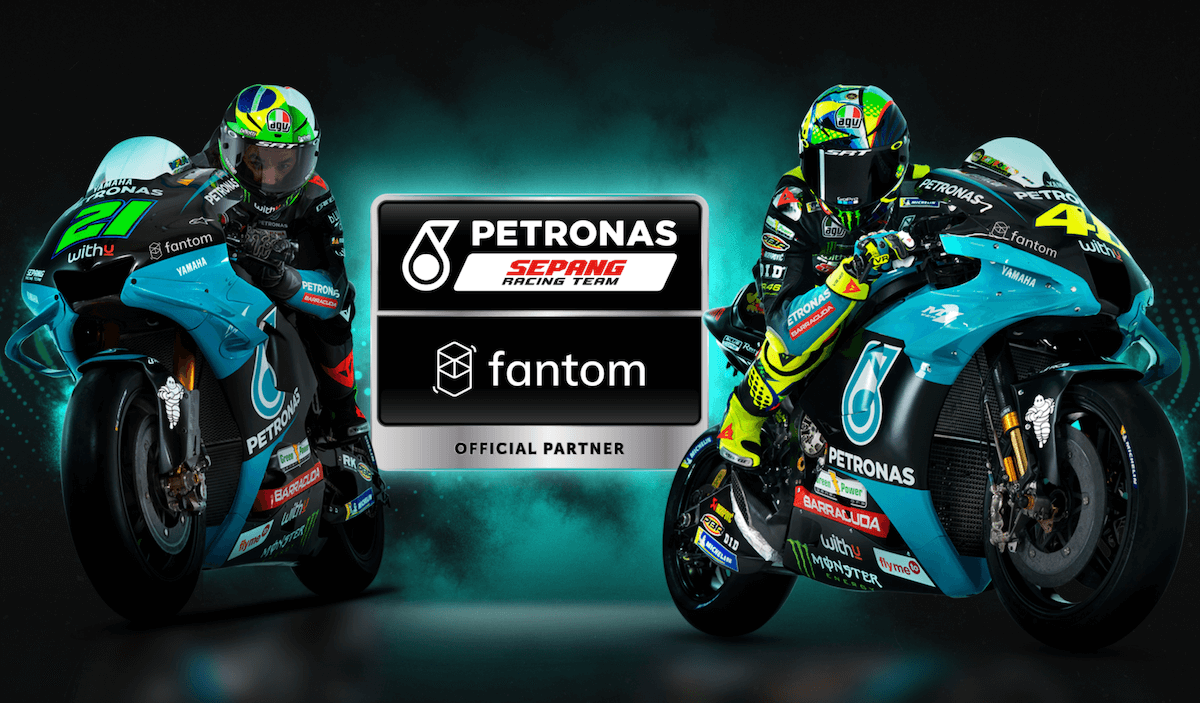 Fantom is an eco-friendly sustainable blockchain platform designed for instant transactions and low costs. The platform is experiencing a staggering increase in popularity and demand with the market capitalization of the $FTM token increasing 50x since January 2021. Fantom is used for both DeFi applications and in governments in Asia, highlighting the rapid expansion of the ecosystem.

PETRONAS Sepang Racing Team has announced global blockchain platform Fantom as a new partner from the Italian Grand Prix in Mugello on May 26. Fantom will be an Official Partner for PSRT, as represented by PETRONAS Yamaha Sepang Racing Team in MotoGP and PETRONAS Sprinta Racing in Moto2 and Moto3. Fantom branding will feature on all the team’s bikes.

Fantom’s branding will be featured on MotoGP rider Valentino Rossi’s leathers and on helmet. Valentino is a multiple time MotoGP World Champion and is widely considered to be one of the greatest motorcycle racers of all time, with 9 Grand Prix World Championships in his name. Fantom’s partnership with PETRONAS begins with the Italian Grand Prix in Mugello which is also Valentino’s home race in Italy and will run for the entire season.

At PETRONAS Sepang Racing Team we pride ourselves on our progressive and efficient approach so it is a delight to engage with Fantom as a new partner. Blockchain technology is a fascinating area of development and the sustainable approach of Fantom matches both our and our existing partners’ approach to business. The growth and potential of Fantom is tremendous and we are pushing hard for great success together over the season ahead.

We are extremely excited about this partnership. Fantom’s technology is incredibly fast and at the same time it is following a green and eco-friendly approach, which aligns perfectly with the PSRT team and with the ambitious sustainability strategy of the sport. I haven’t been this bullish about a tech start-up investment as I am with Fantom. We want to continue to attract even more people globally to the platform through this partnership.

Fantom is a blockchain platform designed for instant transactions and low costs. It’s used for both DeFi applications and in governments in Asia.

Fantom is experiencing a staggering increase in popularity and demand. The market capitalization of the $FTM token increased 50x since January 2021, following the rapid expansion of the ecosystem. Many new DeFi dApps landed on Fantom and so did users. At the moment, more than 100,000 people use Fantom – most of them daily.

Fantom is steps ahead of its competition. Its instant transactions and near-zero fees are revolutionizing the user experience of blockchain interactions, setting the ground for a digital financial system.

The technology is already used in Central Asia to tackle real world problems, including verifying the authenticity of pharmaceutical products in Afghanistan, improving the educational system in Pakistan, and laying the base of a brand-new e-government in Tajikistan.

Additionally, Fantom is as eco-friendly as it gets. Unlike Bitcoin, Fantom uses a Proof-of-Stake system that doesn’t require consuming massive amounts of energy to work.

More details about Fantom can be found at: https://fantom.foundation

Quantum Fintech Group is a Cryptocurrency Hedge Fund and is one of the main early investors and an active supporter of the Fantom project, platform and ecosystem.