StarSwap, the fastest dex on Astar Network is listed on CoinMarketCap 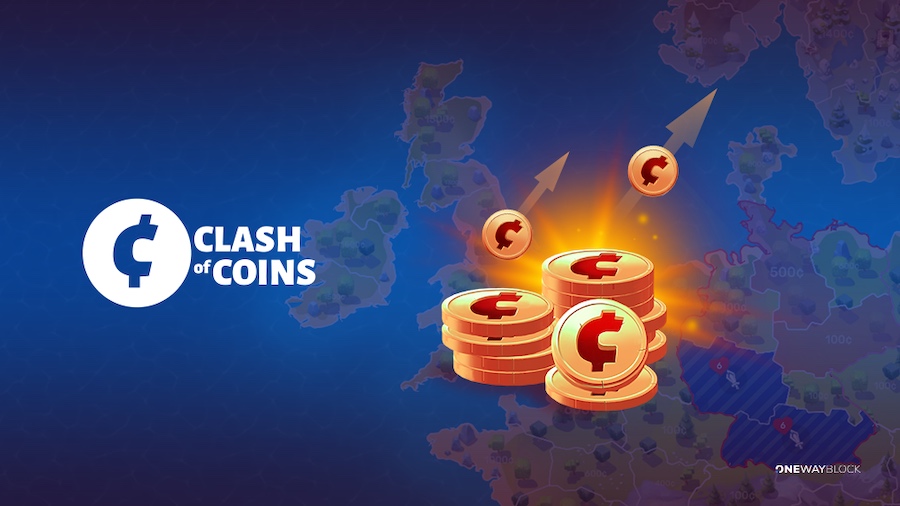 Blockchain games have been going through hard times in recent years. The hysteria around “crypto cats” has already passed, but true gamechangers of GameFi are yet to reveal themselves.

The way we see it, there’s an empty space between good fun playable games and GameFI an OneWayBlock studio decided to fix this gap, and on October 12th, they launched a new game – Clash of Coins. This has been in secret development for 2 years and has launched without an ICO, using their own efforts and enthusiasm.

On June 21 Juno Blees, the senior game producer of Riot games has started a discussion on her twitter about how damaging predatory P2W tactics can be in online games: “There are not really industry-wide incentives to make more ethical choices to protect players, especially in the mobile space, and I see very few studios doing so”.

We asked OneWayBlock founder what he thinks about it.

Founder, Stepan Sergeev, was asked about what’s his studio OneWayBlock standing on this issue is.

“I agree with Juno Blees that there are some very bad studios in the playing field these days. Studios that came to the market to only make money, providing a good fun game for users is second to them. That’s why in today’s world one must not only look at the game but also at the studio that makes it. We, at OneWayBlock, chose to be “game first”. This way, even though we’re in public beta now, you know that you’re getting the real product in the end”  Stepan explained.

OneWayBlock is a gamedev company founded by cryptocurrency fans to make popular blockchain games more user-friendly and approachable to a large number of players. Over the course of three years, 26 individuals have been collaborating to put together wonderfully unique endeavors for the gaming market to enjoy. “The game comes first” is the philosophy that underpins their approach. The team is of the opinion that in the near future, it will be possible for indie games to thrive if they create products that successfully combine extensive functionality with in-depth blockchain-based gaming.

About Clash of Coins

Clash of Coins is a massively multiplayer online real-time strategy (MMORTS) arcade game with support for as many as 100,000 players. The game features a fast-paced gameplay experience and provides players with an unlimited supply of fun and fury as they compete for control over the earth. Each player also has the opportunity to win daily prizes in Ether or BNB.

The in-game coin that may be earned via gameplay is the only currency accepted in the Clash of Coins shop, making it an essential component of the game’s economy. Players have access to a shop where they may purchase non-fungible tokens (NFTs), temporary privileged statuses, cosmetics, and a number of other things that have been issued in the format of non-fungible tokens. At this time, some of the products that may be purchased include one-of-a-kind avatars and different fighting animations, which are displayed when players engage in combat with one another. The high demand for a variety of personalization and customization tools among gamers provides reason to anticipate that the list of NFTs now available for purchase will almost certainly be enlarged in the not too distant future.

If you’ve ever played one of the more popular casual games in the world, such as Subway Surfer or Temple Run, then you’ll definitely like playing this game. Additionally, it is intended to imitate the map view that Plague, Inc. employed; the only difference is that this time, users are required to seize control of the planet by banding together behind a single guise that represents one or more cryptocurrencies.

In May, a number of significant upgrades were implemented to the core mechanics of the game, and OneWayBlock started to work with its global audience by creating creative challenges for most active participants of the official chat and other

This led to the acquisition of more than 20,000 users in only three weeks, which is a significant outcome for a game that is still in its beta testing phase, also noting the short amount of time it has been out there.

The firm has the goal of surpassing the threshold of 200,000 by the end of the current year.

The distinctive detail of the company is its philosophy – put the product first.

OneWayBlock creates games for both itself and the people that play them. They are not interested in making quick cash.

They put forth their best efforts for the industry and do so while maintaining a positive attitude.

Their primary objective is to be one of the first 2.0 game companies that can fully concentrate on the synergy of innovative casual gameplay concepts with operational GameFi models.

The growth in the company’s market capitalization in the years to come will speak for itself, however, this will not happen in the absence of solid marketing.

Development vision for the next 12 months

There are 2 directions in the company’s plans for the year: Gaming and Blockchain. The gaming direction consists of:

– Completion of work on the core components of the game;

– The launch of mid and high-game parts with the ability to upgrade buildings, merge NFT cards, and fully-fledged clan wars with dynamic battles;

– A move to a fully-fledged desktop client;

– The design of a mobile version.

The blockchain direction consists of:

– A range of collaborations with NFT collections;

– The launch of their own token and fully-fledged GameFi;