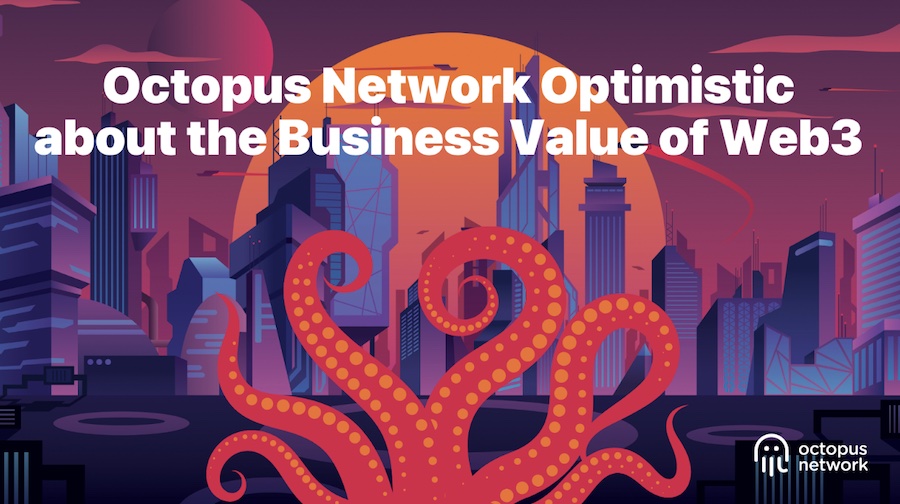 Polar extremes tend to dominate discourse regarding the commercial value of Web3. While one side refuses to recognize business value at all (or only recognizes Bitcoin as having value), the other believes Web3 is the next iteration of the internet to inevitably replace Web2 entirely. As usual, the answers lie somewhere in between.

The commercial value of Web3 technology may not be visible to the naked eye, but it definitely exists and is expanding daily. Though Web3 hasn’t fully sketched out how people should extricate themselves (and their data) from the walled-garden Web2 platforms they’ve become dependent on for their most basic activities, Octopus Network believes Web3 just needs more time to develop.

Where did Web3 come from, and why?

Web3 was born from Bitcoin — and Bitcoin was born from humanity’s eternal push for sovereignty, privacy, and freedom. The ability to move value without an intermediary in a peer-to-peer fashion on a distributed ledger broke open developers’ imaginations worldwide, resulting in the eventual birth of the Ethereum virtual machine and the development of application-layer networks. People realized that if they could transfer value online directly, they could perform other functions without interference from third parties. And the idea of Web3 (coined by Ethereum Co-Founder, Dr. Gavin Wood) was born.

DeFi is an alternative financial system.

DeFi was clearly the first kind of application-layer network to really grab peoples’ attention. But DeFi in a vacuum isn’t sustainable. The assets being traded in DeFi networks must have some other purpose than solely to be traded — this became painfully clear to many during Q2 2022. By itself, DeFi is just an alternative financial system existing on-chain. Financial systems are pointless if they don’t distribute capital for production and economic growth.

The crypto asset marketplace is massive, with billions in trading volume.

This is the foundation that web3 is sitting on. The crypto asset marketplace is massive, with billions in trading volume  — ripe for innovation. But many have argued that current market conditions make innovation too capital-intensive and complex for startup teams and entrepreneurs. They aren’t wrong.

It’s much more straightforward to launch a project in favorable markets when investors are searching rather than buckling down — considering the cost of launching a blockchain or an application chain can reach hundreds of millions. So, what are the options for innovators to keep developing during a bull market?

Octopus Network is a NEAR-based, multichain, Interoperable Network designed to launch and run Substrate-based appchains (with EVM compatibility). Substrate was designed by Polkadot developers as a tool for providing blockchain functionality out of the box. While Octopus has synergy with Polkadot, its market is different. Polkadot parachain auction slots are financially out of reach for most.

Octopus Network seeks to serve the broader global markets by exposing developers worldwide to Substrate. Few appchain infrastructure projects offer this range of comprehensive support from the ground up — scaffolding developers by providing them with tools and opportunities that allow ideas to breed, ferment, and bubble up to the surface as Web3 solutions.

The Octopus Foundation grants 100k in $OCT tokens to its first 100 appchains. $OCT, the native token for Octopus, plays a primary role in its Leased Proof of Stake (LPoS) security leasing market. Appchains that launch in the Octopus Network can lease the amount of security they need and scale as they go.

Some appchains will inevitably fail, paying out the cost of innovation, but others will succeed, continually enlarging their economic scale.

Even projects at more mature stages that may be struggling during development can benefit by migrating to the Octopus Network. The Octopus Network Technical Support Team is well-rehearsed in cross-chaining and interoperability. They are also developing Substrate IBC to connect to chains like Cosmos, Polkadot, and other IBC-enabled blockchains. Octopus Network even provides tools to support appchains that choose to leave the network to transform into independent blockchains, so their existing cross-chain assets aren’t affected.

Many web3 startups will fail, but not all.

Octopus Network acknowledges that some appchains will inevitably fail, paying out the cost of innovation — but others will succeed, continually enlarging their economic scale. According to Octopus Network, any Web3 team can apply to start their application chain. Still, it’s ultimately up to the community to decide whether a project launches as an appchain and succeeds.

This appears to be baked into Octopus Network’s security leasing design and governance. In fact, the entire structure of Octopus Network seems like a community-fueled appchain factory — spitting out customized application-specific blockchains in the form of whatever business idea survives the community voting queue to surf the waves of market competition.

But in crypto, all projects are subject to the laws of the “network effect.” The value of a network increases as the number of users increases. The more users that come, the higher the network’s business value, increasing the token value, drawing more users, etc. The difficulty for young Web3 teams is attracting users, to begin with. As a part of the NEAR and Octopus Network Ecosystems, appchains that launch in the Octopus Network have the advantage of a ready-made audience waiting to be convinced.

Octopus Network recognizes that it’s ultimately up to the users to determine the business value of a Web3 application. Therefore, it reasons the more Web3 proposals users are exposed to, the higher the chance of novel Web3 solutions gaining traction and increasing the business value of Web3. Octopus Network is optimistic that community-supported applications will rise to the surface because of the solutions, services, and value they offer users — if Web3 is given the opportunity to develop.