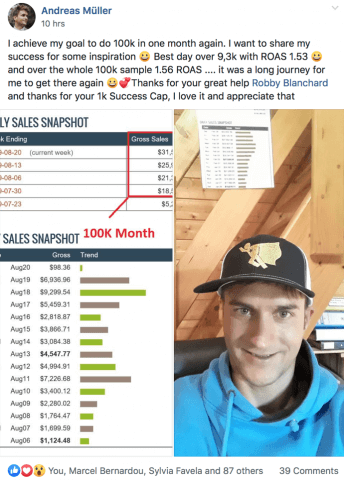 Robby Blanchard, CEO of Blanchard Media and renowned online entrepreneur, announced a new webinar for anyone looking to learn the principles of successful affiliate marketing based on Clickbank and Facebook advertising.

Blanchard Media LLC, a digital marketing and entrepreneurship agency, launched a new webinar designed to help aspiring entrepreneurs build a successful affiliate business using Facebook advertising and Clickbank. The strategies introduced in the course require no previous marketing experience and can be easily implemented by anyone committed to achieving their financial independence.

More details can be found at https://bit.ly/2NrAx2Q

Starting an online business can be an effective way for anyone to create a stable source of income without the inconveniences of traditional entrepreneurship.

The method introduced by Robby Blanchard is based on Facebook advertising and Clickbank affiliate marketing.

The combination allows entrepreneurs to generate massive passive incomes by successfully promoting third party products – which means they don’t have to invest in developing their own products or services.

The business practices at the core of the webinar are so powerful that they have helped Robby Blanchard build a 7-figure online business.

The principles can easily be scaled up to generate a steady source of income, depending on the commitment and motivation of each participant.

Registration for the webinar is open to anyone willing to learn the principles of successful affiliate marketing and does not require any previous marketing or entrepreneurship experience.

Robby Blanchard stated: “The best part is you don’t need to have any experience to do this. I’m going to show you exactly how to use Facebook to generate thousands of dollars per day even if you don’t have a product. It doesn’t matter if you don’t have prior experience, or if you’ve never run Facebook ads before.”

With the recent announcement, Blanchard Media LLC continues to invest in the development of high-quality resources for modern online entrepreneurs.