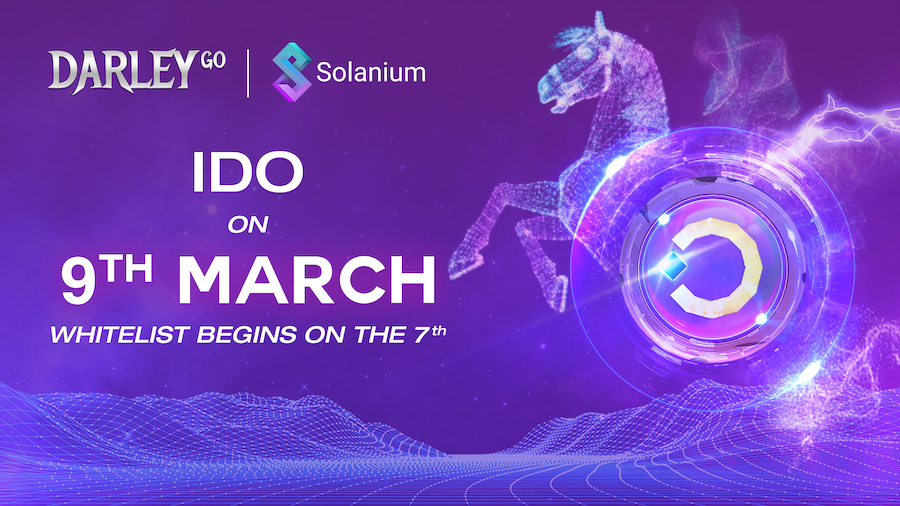 Blockchain-powered game, DarleyGo, is excited to announce a date for its Initial Dex Offering. The team disclosed recently that the much anticipated IDO will hold on Solanium on March 9, 2022.

That’s not all. The team revealed that its whitelist will officially begin from March 7th, two days before the IDO. Whitelist offers a competitive advantage to investors that enroll in that they will have better access to the tokens when the public sale goes live.

According to the team, 20 million of $DGE tokens will be offered on the day of the public sale for 0.08 USDC per token. $DGE is the governance token that is used for staking, voting, and rewards.

DarleyGo is an NFT game that runs on the Solana Network, known for its efficiency, scalability, and stability. It is a mythical horse racing game that combines adventure and imagination to keep players immersed in the intuitive game universe. Players acquire, collect, breed, race, and even train their virtual horses.

DarleyGo is amongst the crop of games that emerged from the blockchain space in the last couple of months, disrupting the gaming world. Since 2019, the blockchain gaming industry has massively transformed, with interest in the NFT games at its peak.

In 2020, the industry generated over $161 billion in revenue. The previous year was $11 billion short, and experts predict that revenue generation will hit $320 billion in 2024. Undoubtedly, this figure is attainable, given that players pay attention to NFT ownership and the crypto rewards attached to blockchain games.

DarleyGo leverages the popular play-to-earn mechanism. Its incentivization model enables the gamers to receive in-game tokens that they can convert into real cash. According to the team, players earn if they race their horses to victory.

This game is based on the famous mythical horse story about a horse-dominated paradise with three tribes. These tribes, Darley, Areo, and Hayato, compete yearly in a horseracing contest for glory and supremacy. All the horses in the game have rare abilities peculiar to each tribe that impacts their performance.

The Racing or the PvP mode has two events – regular and special. Players in this mode compete against each other in various levels for rewards. The game rewards the top three racers with its native in-game token, $GXE. However, the amount depends on the stage. Higher levels attract larger prizes but are more challenging than others.

The Training Mode or PvE mode is self-explanatory. Here, the players are equipped with the right tools to train their horses to perfection. This mode is subdivided into Trotting and Galloping. Trotting requires horse owners to complete tasks to unlock special abilities and badges. A badge is a scorecard that provides more information about your horse’s health, performance, character, etc.

Galloping trains the horses to have higher energy. It adds to the chances of the horse winning the race.

The Breeding Mode enables the horse owners to explore the horse’s performance, generation, ability, strength, and weaknesses. Two breeding styles are available here – stud farms and in-house breeding. The former requires the gamers to list their horses to a farm, while the latter allows the horse owner to breed without a stud farm.

DarleyGo recently sold out 3,800 Genesis Cards in 20 seconds. A Genesis Card grants the players access to an NFT horse. Redeeming this card also rewards the player a Genesis Badge, which allows the player to explore the ecosystem’s DAO and other features.