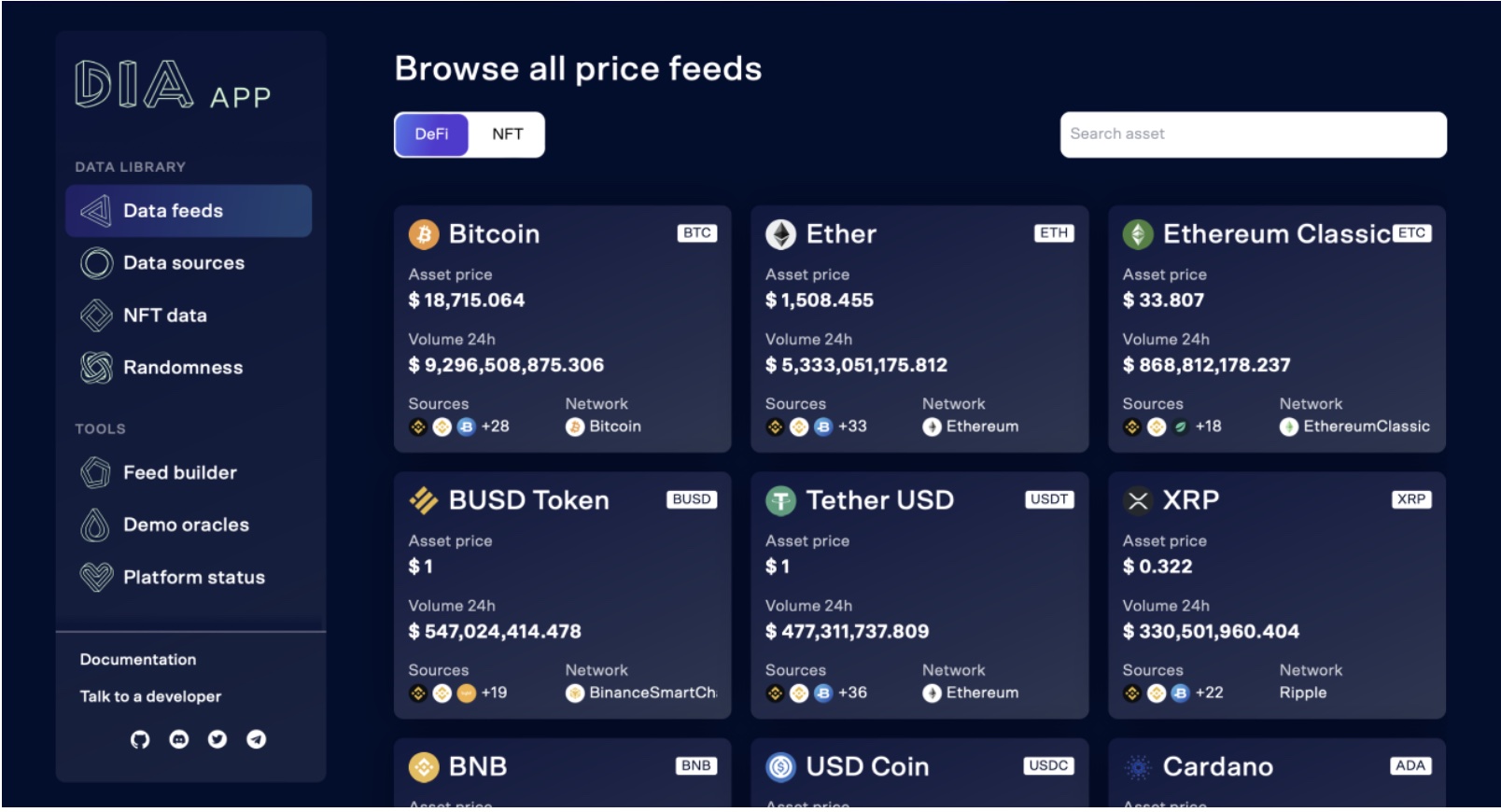 DIA, the open-source oracle platform for web3, announced today a full re-release of their website, featuring a set of tools to explore and create data feeds autonomously, wrapped in a new brand identity. While the core product – end-to-end data sourcing and delivery for web3 projects – remains unchanged, the update gives a deep look into the data platform and a hint of where DIA’s journey will go.

DIA can be seen as somewhat of a special case in the oracle landscape, as it strongly differs in nature in comparison to most other projects. Instead of aggregating existing data feeds from third party APIs and bringing those on chain, DIA takes a vertically integrated approach that enables full visibility of the data value chain from sourcing to delivery.

By scraping data directly from a number of centralised and decentralised exchanges, the platform is able to retrieve pricing data for literally any asset, as soon as it is traded. Users are able to customise any feed according to their specific needs. DIA also delivers the feeds via to all relevant, constantly growing networks in web3.

This results in a unique value proposition, as it allows DIA to cover long-tail assets that are not provided by other oracle projects. DIA’s new homepage features an app that allows the exploration of its entire library.

Not only does it show the real-time output of the feeds as well as relevant metadata like all the sources that are used for any given feed. Users are able to choose any available pair listed in the library and tweak the parameters of the feed to meet their needs.

For instance, a DeFi dApp might want to receive data about the price of Ethereum only for specific markets that it executes on, or might want to increase the update frequency or change the trigger that causes an oracle update from a time-based method to a deviation-based method. This tool, named ‘xStream’, will enable DIA to serve the exponentially growing number of Web3 projects with much more specificity while increasing speed, efficiency and transparency.

“As an oracle provider, despite fulfilling such a fundamental building block of the web3 ecosystem, the nature of our business is often quite abstract, even for experienced industry veterans”, says Michael Weber, co-founder and Association President at DIA. “With this new release, not only do we make our immutable financial data library tangible and accessible, we also provide autonomy and transparency for our users by enabling them to create the exact feeds they need to feed their smart contracts.”

A new identity to match the progress

Despite not being a core product development it is worth mentioning that the team behind the Switzerland-based data provider has also launched a full do-over of its brand. While its name and domain remain unchanged, the new look aims to convey more technical depth and maturity of its product offering.

The announcement also vaguely hints at DIA’s plans for the foreseeable future. As can be read in full in the project’s Medium blog, key focus areas will be the further development of its data offering to provide more sophisticated feeds, providing a trustless architecture that ensure stability and security and improved risk monitoring tools.#

The DIA platform enables the sourcing, validation and sharing of transparent and verified data feeds for traditional and digital financial applications. DIA’s institutional- grade data feeds cover asset prices, metaverse data, lending rates and more. DIA’s data is directly sourced from a broad array of on-chain and off-chain sources at individual trade level. This allows DIA feeds to be fully customised with regards to the mix of sources and methodologies, resulting in tailor-made, high resilience feeds, setting a new paradigm for oracles.