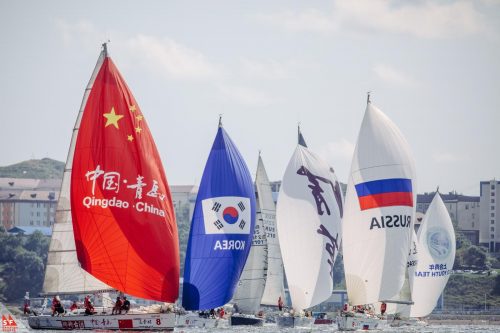 Port of Qingdao 2019, the 4th Far East Cup International Regatta is to be opened on August 24th as an ISAF Grade 2 offshore event born in Qingdao and one of the 20 major events of 2019 Qingdao’s International Season of Fashion and Lifestyle.

Port of Qingdao 2019, the 4th Far East Cup International Regatta is to be opened on August 24th as an ISAF Grade 2 offshore event born in Qingdao and one of the 20 major events of 2019 Qingdao’s International Season of Fashion and Lifestyle. Sailors from over 10 countries including China, Russia, ROK, Japan, Singapore and Australia will steer the 40 feet Beneteau sailboats on behalf of 8 teams to visit Vladivostok, Russia; Toyama, Japan; and then return to Qingdao.

The Far East Cup, launched in 2016, is the first ever long distance regatta connecting China, Japan, ROK and Russia. In 2018, it was included in the sport section of Russia Eastern Economic Forum. Leaders from five countries including President Xi Jinping and President Putin attended the award ceremony for the first leg and presented the best organization award.

The Far East Cup is included in this year’s government work report. It is also one of the 20 major events of the Qingdao International Season of Fashion and Lifestyle. As this year marks the Year of China-Russia Local Exchanges and Cooperation and the Year of China-Japan Youth Exchanges, Qingdao is using the universal language of sailing — open, modern, dynamic and fashionable — to amplify the influence of the Belt and Road international sports events as a cooperation platform and to strengthen the connectivity of China, Russia and Japan in sports, culture, port, tourism, economy and trade, etc., and contribute to the celebration of the 70th anniversary of the founding of the People’s Republic of China.

This Far East Cup will for the first time have a stopover in Japan and the last leg will be from Toyama to Qingdao. Meanwhile, it will once again be included in the 5th Eastern Economic Forum held in Vladivostok from September 4th to 6th. In Toyama, the Far East Cup will be included as part of the activities of the Club of the Most Beautiful Bays of the World.

The Qingdao Port Group of Shandong Port is the title sponsor of this year’s Far East Cup. As the world’s 6th largest port in the world and the first A+H listed port company, Qingdao port is accelerating the transformation from a logistics port to a trade port, a step to inject new impetus into Qingdao’s ambition to build an innovative international shipping, trade and finance center, especially the construction of the Northeast Asia trade center. On August 6th, the Shandong Port Group was established in Qingdao, which marks a new chapter in the reforming development in Shandong. This has brought new opportunities for the development of Qingdao Port. As the northern gateway of the 21 Century Maritime Silk Road and the eastern hub of the Silk Road Economic Belt, the Qingdao Port Group of Shandong Port will use the Far East Cup as a platform to expand cooperation and exchanges with Russia, Japan and other northeast Asian countries and regions and contribute to the high quality economic and social development of Shandong and Qingdao.