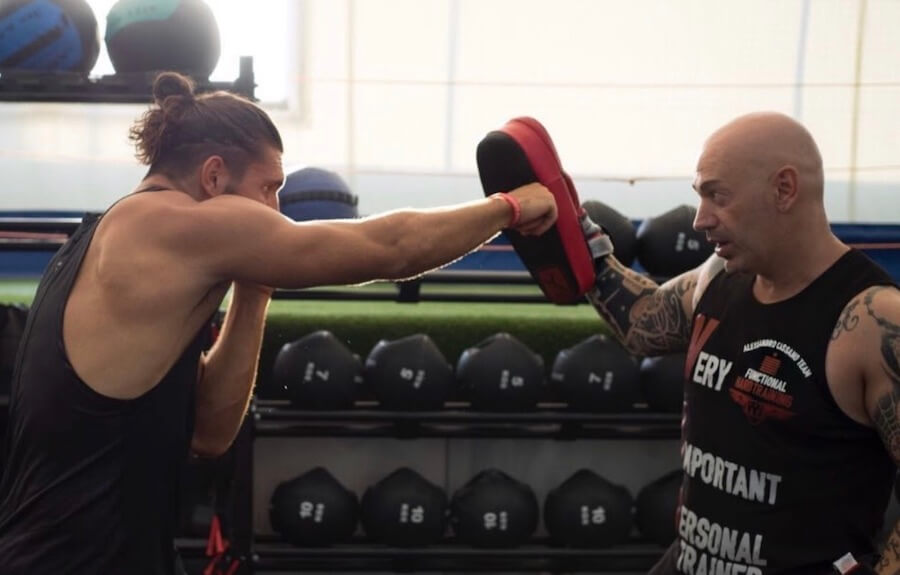 What began as a skill for sports when he was a child, in the Karate practices that led him to conquer the black belt at an early age, later became a deep passion for the fitness world. During his youth, he had the opportunity to excel in different areas mainly the art of Wing Tsun, where he later taught.

Later, convinced that he was on the right track, Alessandro became a professional personal trainer. This helped him to advance in his goals and he began to give private lessons, standing out more and more, to the point that his work will lead him to collaborate with great sports figures, among them Marco Marchionni, Amauri, and Gianni Munari, as well as Giambattista Venditti and Matteo Azzali.

Later on and focused on his purpose of growing in his professional area, he was trained in other important aspects such as Metabolic Training, weight loss, and functional training for women.

Recently also, in 2020, he obtained his specialization in Neurolinguistic Programming and surely will continue with a dedication to his preparation and expansion in other areas.

One aspect that characterizes Alessandro as a professional is the ability to combine physical and mental well-being as a whole. In this way he not only allows people interested in his training to improve their physical appearance but also to favorably transform their mentality, the latter being elementary to achieving real results.

Using not only his physical knowledge but also the charisma, determination, and positive energy that defines him, Alessandro has managed to differentiate himself from many other trainers. He defines each experience on his personal and professional path as a journey he wishes to share with others to help them reach their maximum potential focused on physical and emotional health.

In addition to being a personal trainer, he is a life coach. This combination becomes powerful, especially when it comes to motivating, encouraging, and promoting a better lifestyle in his clients.

For him, motivation has as much value as physical training, in fact, part of the idea that this, the main element to be able to break the limits and false beliefs of “I can’t”.

Teamwork has been another key factor in helping you progress on your goals. He points out that every day he has the opportunity to share with more than 30 people whom he guides with the help of a team that he guides, without which he assures that so much work would not be possible.

But in addition to this, it has been his perseverance and intention to continue training for growth that has also allowed him to reap great achievements. To the point of participating as a guest in a conference together with a famous company in the fitness world, where he not only shared knowledge but also the path of his life that has led him to where he is today.

Growing up in the digital environment became highly important for Alessandro since nowadays, an online presence is an essential element for those who like him to try to have a wide reach of the services they offer.

This led him to consider the relevance of a personal brand and to work on its construction in a dedicated and constant way. Hence, starting his website and working on interaction on different digital platforms has allowed him to access a considerable amount of people who now know about his profession and his personal life as a whole.

Currently, he is working on his training system called TRIVO, which he plans to expand progressively. This methodology can be characterized as innovative because it is focused on achieving objectives from a mental and then a physical perspective.

It is in this system where Alessandro combines the power of his knowledge in fitness and neuro-linguistics to establish a relationship of cooperation, trust, and empathy with each of the people who make up his team as a personal trainer.